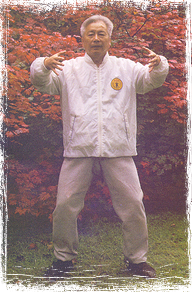 Yu Yong Nian is the world’s leading authority on the art of Standing Like a Tree, known in Chinese as Zhan Zhuang Chi Kung.

As a young man in the early 1920s, he had faced a crisis in his life. He had completed his studies in Western Medicine and qualified as a dental surgeon. But long hours of work in the Beijing Railway General Hospital had drained him of energy and left him completely exhausted.

Following the advice of a friend, he joined a group of people who were spending time standing still under the guidance of a master who was advocating its benefits both for health and the martial arts. The energy restoring power of the system was immediately evident to the young dentist and he became one of his teacher’s most diligent practitioners.

After nine years’ training, he began using the system as a treatment for internal diseases at his hospital. His initial successes led three years later to a major medical conference in 1956 at the Beijing Shoudong San Hospital to introduce the system to hospitals throughout China. He then began teaching publicly in the mornings in Yun Tan Park, Beijing.

After the Cultural Revolution, Professor Yu published the first of four books on the Zhan Zhuang Chi Kung system. The first edition of Zhan Zhuang for Health (Educational Publishers, Beijing, 1982) came out in February 1982 with a print run of 20,000 copies. By April a second edition of 120,000 copies was issued. By 1987 a further 294,500 copies had been printed. A limited edition of his second book on the application of Zhan Zhuang for Health was published in Beijing in 1989 and in the same year his fourth book on the system was issued by Cosmos Books in Hong Kong.