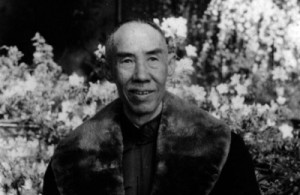 Born in Hebei province, the young Wang Xiang Zhai suffered from poor health and was encouraged to improve his physical condition by taking up martial arts training under Master Guo Yuen Shun who lived in his village. After his master’s death, he spent the next 10 years travelling throughout China meeting and studying under the great martial arts masters of his day.

By the mid-1940s he was ready to share the results of his research. He began teaching in Shanghai and quickly attracted a circle of students. Impressed by Master Wang’s skill and martial prowess, his followers began calling his system Da Cheng Chuan, The Great Accomplishment. Several years later Master Wang came to Beijing, to teach in the capital.

The foundation of his system was Zhan Zhuang Chi Kung, about which he told his students: action originates in inaction and stillness is the mother of movement.

He was fond of composing short verses to encourage his students as they persevered with the unusual demands of their stationary training. One of his verses describes the immense power generated by the standing exercise and hints at the subtle awareness that it awakens:

Propelled by natural strength,
You are as strong as a dragon.
Inhaling and exhaling naturally and quietly,
You perceive the mechanism of all movement.

Master Wang’s influence was widespread. Several streams of his teaching have continued to this day. His daughter, Madame Wang Yu Fa, now in her late seventies, became an outstanding teacher in her own right, as did Professor Yu Yong Nian. Other distinguished teachers in the lineage included Professor Yu Pung Shi, a medical doctor, and Master Han Hsing Yuen, a practitioner of traditional Chinese medicine.