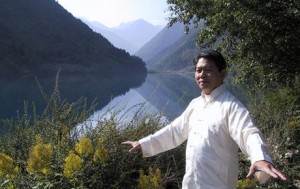 Born in Hong Kong shortly after the Second World War, Lam Kam Chuen studied under masters such as Lung Tse Chung and Yim Sheung Mo (both of whom were disciples of Ku Yue Chang, known throughout China as “The King of Iron Palm”).

After studying Chinese Medicine, he opened a school and clinic in Hong Kong and travelled to Beijing to study Zhan Zhuang Qigong under Professor Yu Yong Nian.

Master Lam came to the West in 1976 and gave the first European demonstration of the art of Zhan Zhuang Chi Kung.

Then came his ground-breaking work published by Gaia Books, The Way of Energy, introducing Qigong Zhan Zhuang to the West, foreword by Professor Yu.